Between the Jigs & the Reels

"As someone who's eternally grateful to be 'making a living doing what I love,' Joanie Madden seems happy to just be at whatever airport or lodging she happens to find herself in, as she dashes hither and yon on a typically busy tour itinerary.

At some point, however, it surely occurred to Madden that Cherish the Ladies had become bigger than the personal happy zones of she and her bandmates in the long-running Celtic musical group — had become, in fact, a family tradition that spanned generations, geographic regions and seasons of the calendar year."
SIX LADIES PLAYING | APP.com | Asbury Park Press:
Posted by Steve at 05:29 No comments:

"Tomaseen Foley's past featured memorable musical and storytelling gatherings around fireplaces with family members and neighbors. His life at that time did not include electricity, running water, cars or television sets.

The Irishman, who grew up in the remote parish of Teampall an Ghleanntain ('church of the little glen') in West County Limerick in the 1940s and '50s, will delve into that 'communal way of life' when he brings 'A Celtic Christmas' to the Northshore Performing Arts Center in Bothell at 7 p.m. Dec. 19.

'It recreates my childhood in a way — I lived in very unique circumstances,' said Foley, 63, the show's storyteller who now lives in Medford, Ore., but still regularly visits his family farm in Ireland. 'It's the recreation of a night in a farmhouse before Christmas. We recreate that on stage where the audience are the neighbors.'"
Storyteller Foley's 'A Celtic Christmas' dances into Bothell Dec. 19/ Northshore Performing Arts Center - Bothell Reporter:
Posted by Steve at 22:40 No comments: 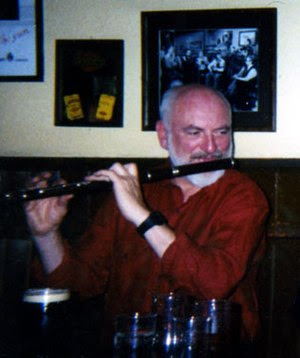 Image via Wikipedia"Irish music will be out of this world literally today when the U.S. /Russia joint space station mission blasts off from Kazakhstan.

That is because astronaut Catherne ‘Cady’ Coleman has packed a traditional Irish concert flute given to her by Chieftains musician Matt Molloy.

Coleman is a committed Irish traditional musician and told a press conference yesterday that she intended playing Irish music in space, the first time it has been heard beyond the bounds of earth.

Matt Molloy told The Irish Times yesterday that he had met the NASA astronaut ten years ago after playing a concert in Houston.

“We had done a concert and as always we had a tune afterwards with local musicians.It transpired she played the flute and we have been friends ever since,” he told the paper."

Irish music will be out of this world for first time ever | Irish News | IrishCentral:

'Irish Christmas in America' almost a flight of fancy

"Christmas in Ireland can be similar to the one in America, but some of it really is for the birds.

Oisin Mac Diarmada, a fiddler and one of the leaders of the Irish group, Teada, says the wanderings of the 'wren boys' will be part of the band's 'Christmas in America' celebration Saturday in Oakland.

'The show will feature the tunes and traditions of Christmas in Ireland,' he says. 'There will be songs like 'Silent Night' and 'Parting Glass,' which all the Americans seem to know, but then there will be songs in the Irish language.'

The concert also will look at the 'wren boys,' who dress up in the rags of pagans and wander about seeking treats on the feast of St. Stephen on Dec. 26. They get those treats because they bring with them a wren -- often simulated these days -- which they have captured because a bird of that type betrayed the hiding spot of St. Stephen.

'It is a way of blending the pagan history and the Christian,' Mac Diarmada says."
'Irish Christmas in America' almost a flight of fancy - Pittsburgh Tribune-Review:
Posted by Steve at 22:37 No comments:

"SONGWRITERS have been translating heartache into melody for centuries, scoring the human condition with weather-worn notebooks and battered guitars. As the Irish folk singer Frank Harte once said, “Those in power write the history, while those who suffer write the songs.”
In Brooklyn, at least, they don’t have to suffer alone. At the Brooklyn Songwriters Exchange, a free monthly series for aspiring and established songwriters, they can air original work for eager, empathetic ears."
Brooklyn Songwriters Exchange, Weekly Park Slope Harmonies - NYTimes.com:
Posted by Steve at 22:35 No comments:

LOS ANGELES (Dec. 15, 2010) -- Trinity Broadcasting Network (TBN) – the world’s largest religious broadcaster and a favorite with millions of viewers across six continents – is proud to feature programming complete with all the bells and whistles, and Uilleann pipes and Irish drums, as it goes Celtic this Christmas with A Celtic Christmas!

A hauntingly beautiful celebration of Christmas, A Celtic Christmas is a one-hour program showcasing Irish music and dance going back to the 12th century as well as the most modern Celtic innovations such as River Dance and Lord of the Dance. Thrilling pieces featuring the Uilleann pipes, Irish whistle, Celtic fiddles, Irish drums, along with keyboard and percussion performed by the world-renowned Irish music group The Celts are sure to leave viewers breathless.

“This is a Christian Celtic Christmas extravaganza,” says Susan Zahn, Christian media expert. “It’s a perfect marriage for TBN and Christian television, and a perfect musical blend when the ancient world meets the amazing innovations of the twenty-first century. A Celtic Christmas showcases carols dating back some nine hundred years, combined with the spicy excitement of modern drum loops and synthesizer work. It’s another TBN must-see program for Christians and music lovers alike.”

The Thrilling Musical A Celtic Christmas, Airing Dec. 22nd & 24th on TBN
Posted by Steve at 22:50 No comments:

"Tomáseen Foley is sharing with American audiences what Christmas was like for him as a boy growing up in 1960s Ireland.

Foley’s “A Celtic Christmas” recreates Christmas Eve in a farmhouse in the remote parish of Teampall an Ghleanntain in the west of Ireland.

It’s a night of community, when neighbors gather together and tell stories, dance and play music. It will be performed at 8 p.m. Dec. 11 at Ramsey Auditorium in Fermilab’s Wilson Hall in Batavia.

“In those days, there were rambling houses. There were homes where neighbors rambled to at Christmastime and they would bring instruments with them,” Foley said. “These were long nights of singing and dancing and storytelling, and we attempt to recreate that onstage.”"
Fermilab show recreates Irish Christmas customs - Beacon News:
Posted by Steve at 08:08 No comments:

"Many Americans tend to have a provincial view of the world, thinking that the way things are done here is much the same everywhere else, especially when it comes to holidays. However, as traditional Irish band Danú showed Friday night at the Macky Auditorium in Boulder, Christmas traditions can vary widely.

What else can you make of the “wren dance,” which commemorates a tradition where Irish people hunted wrens on St. Stephen’s Day (the day after Christmas) since a wren betrayed Stephen’s position to a passing Roman garrison? As demonstrated, the ritual seems to part-Samhain, with men dressing in costumes of straw and traveling around from house to house singing and taking tips of beer and other libations."