Craobh Seán Treacy CCE will launch Réalta 2012. A new CD featuring the young musicians and singers from the branch at Clasac,Clontarf on Saturday 8th of December at 7:00pm. All are welcome The CD will be launched by Helena rowsome,a founder member of the branch and will be followed by an open session.

Email ThisBlogThis!Share to TwitterShare to FacebookShare to Pinterest
Labels: comhaltas

It’s been an exciting year for Dervish and one they plan to end in style, with a special concert for fans and family on Thursday, December 27th 2012 at Hawks Well Theatre, Sligo with some surprise guests lined up for this unique concert. Dervish will also perform material from their forthcoming album or the first time. Tickets for DERVISH are available from the Hawks Well Box office Phone 0719161518, for on line booking info@hawkswell.com

This will be the legendary ensemble’s last concert of what has been a very memorable year which has seen DERVISH’s remarkable and distinguished career take many new avenues.

In August, the band signed a publishing deal with The Bucks Music Group in London, where they now join a high profile publishing roster that includes Ed Sheeran, Brian Eno, and many other music business legends. The deal will position the band’s music in the film and TV world for the future. In keeping with the same theme, Dervish were asked to write the music for a new ITV TV series called “James Nesbit’s Ireland” which will be broadcast in mid 2013.
Dervish were honoured to be asked by Irish President Michael D Higgins to perform at one of his first functions at Aras An Uachtarain adding to the list of Heads of State they have performed to internationally.

Move over MTV and Vevo … a new Irish-language video app called TG Lurgan has launched to present music videos as Gaeilge. The app has been developed by the makers of the Irish-language social network Abair Leat! which launched earlier this year.

The free app TG Lurgan is now available to download for Android and iOS users from Google Play and the Apple App Store. The app has been developed by the Irish language school Coláiste Lurgan, which is headed up by Michéal O'Foighil and created Abair Leat! 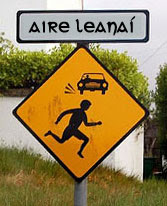 One hundred and twenty balloons were released in different locations around Ireland on Sunday afternoon, including Eyre Square, as part of special Irish-language Spraoi sa Phobal family days which officially launched Bliain na Gaeilge 2013 and started the year-long festivities to celebrate 120 years of the revival of the Irish language.

The revival of the Irish language began in 1893 with the founding of The Gaelic League, or Conradh na Gaeilge as it is now known. Two million people on the island of Ireland claim to have Irish today and the Bliain na Gaeilge festival aims to provide these people with thousands of different opportunities to use Irish throughout 2013.

Email ThisBlogThis!Share to TwitterShare to FacebookShare to Pinterest
Labels: Gaeilge 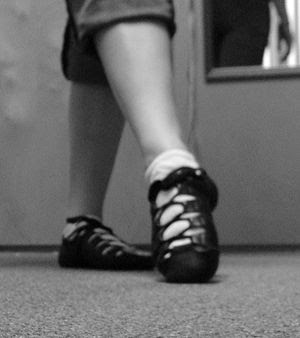 PANAMA CITY — The music, language and traditions of Ireland are being passed on to younger generations in downtown Panama City through dance.
“I love passing on the traditions and love of Irish dance that I had growing up,” Teresa Kane said. “The love of the music and sometimes in class I’ll speak the Irish language, so they know a little bit of the language. I’m so far from home; I miss it. … It makes me feel connected to home.”
Kane has been teaching Irish dance to children and adults for 10 years at the Niall O’Leary School of Irish Dance, Panama City, and she’s not the only one happy to share the knowledge. Bobbi Lindsey said you don’t have to be Irish to appreciate the dance or the music, but for her, it’s heritage.
“Up north you have neighborhoods defined by nationality, and here we’re such a military town; people come and go,” Lindsey said. “This keeps our traditions and our nationality alive through the music. It’s important to me that she can keep and learn the Irish traditions.” 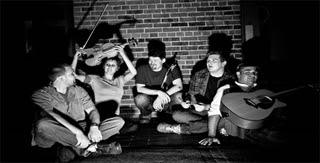 “Irish culture has many unique traditions – and that includes holiday tunes,” said Barry Stapleton, director of the Ward Irish Music Archives at the Irish Fest Center. “The Tallymoore Christmas Concert is another example of how we continue to share the Irish experience with the Milwaukee community.”

Tallymoore will entertain guests with seasonal songs bridging both American and Irish holiday traditions. The five members that make up Tallymoore began as a local Irish a cappella group with some instrumentation. They have since become a modern Irish folk band, putting new twists on traditional favorites.

Email ThisBlogThis!Share to TwitterShare to FacebookShare to Pinterest
Labels: milwaukee

The Paddy Killoran Monument now under construction at the Gurteen Road entrance to the Ballymote Town Park, is to be unveiled on Sunday 2nd December by Master Fiddler Kevin Burke (Bothy Band, Patrick Street) at 12.30pm All Welcome

The Frankie Kennedy Winter School 2012 will be officially launched on the Rónán Beo@3 programme on RTÉ Raidió na Gaeltachta on Thursday 29 November, broadcast live from Queens University Belfast.
The public is welcome to attend the programme, which will include excellent traditional musicians and singers, and will be broadcast from the Students Union Building in Queens form 3pm – 5pm.
Rónán Beo @3, normally broadcast from Raidió na Gaeltachta’s studios in Gaoth Dobhair in Donegal, will relocate to Belfast for this very special event.
Piper Robbie Hannan will officially launch the school, and there will be a host of other guest musicians and singers performing live including Dermot McLaughlin, Úna Monaghan, At First Light, Tara and Dermie Diamond, Conor Byrne, Gearóid Ó Maonaigh, Réalta, and musicians from Queens including Dr. Martin Dowling, Christine Dowling, Nollaig Casey, Conor Cadwell agus Úna Monaghan.

Cherish the Ladies coming to Newton in December - FTLeavonworth Lamp

From the dancing notes of the fiddle to the lilting tones of the flute, traditional Celtic folk music continues to delight audiences with both sweeping ballads and dizzyingly fast reels. Local music lovers will have a chance to get a taste of this type of traditional Irish music through an upcoming concert at the Fox Historic Theatre in Newton. The Irish musical group “Cherish the Ladies” will be presenting “A Celtic Christmas” concert at 7 p.m. Dec. 3. General admission tickets are $27 and are available through SelectASeat.com, Dillons outlets (South Dillons in Newton), or at the Fox Theatre Box Office (cash or checks only) from 9 a.m. to noon Nov. 24 and Dec. 1.

The Edgerton Center for the Performing Arts at Sacred Heart University celebrates the season with An Irish Christmas. This is Ireland at its best featuring a group of legendary performers bringing to life all aspects of Irish culture under one roof for One Night Only on Saturday, December 8 (2012) at 8pm.

One doesn’t have to be Irish to thoroughly enjoy an authentic look into life in Ireland at Christmas when friends and family gather to celebrate the birth of Christ. It is inevitable that many of those celebrants, if not all, would play an instrument, sing a song or tell a story creating memories that last forever.


Patrick Street was formed in Dublin in 1986 with Kevin Burke (formerly of The Bothy Band) on fiddle, Jackie Daly (De Dannan) on button accordion, Andy Irvine (Sweeney's Men, Planxty) on bouzouki and vocals, and Arty McGlynn (Van Morrison) on guitar. McGlynn later left the group, and other members were added: Ged Foley (The House Band, Battlefield Band) on guitar, and Declan Masterson on uilleann pipes and keyboards. They have also played with Donal Lunny, Bill Whelan and Enda Walsh. Jackie Daly left shortly after recording "On the Fly". 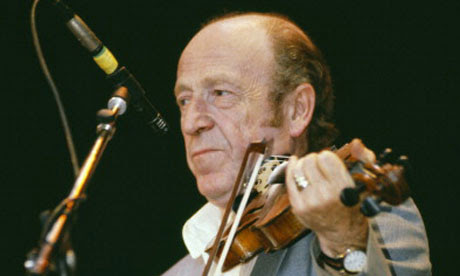 Martin Fay, who has died aged 76, was the original fiddle player with the Chieftains, the band that has done more than any other to popularise Irish traditional music globally. Led by the charismatic piper Paddy Moloney, the Chieftains collaborated with musicians from a wide range of genres and cultures – from bluegrass to Chinese and Mexican music – and brought in guest performers such as Mick Jagger, Van Morrison and James Galway. Yet traditional tunes lay at the heart of the band, with Fay's fiddle a vital part of their distinctive sound.