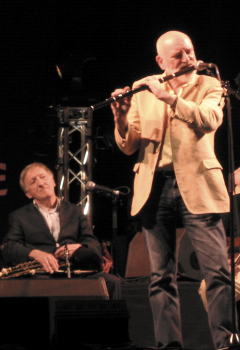 Legendary Irish outfit The Chieftains will embark on U.S. and European legs early next year, celebrating the group's 50th anniversary and a new collaborative album, "Voices of Ages."

The quartet, helmed by Paddy Moloney (Uilleann pipes, tin whistle) along with Matt Molloy (flute), Sean Keane (fiddle) and Kevin Conneff (bodhran, vocals), will kick off the U.S. portion of the run with a Feb. 17 show in Santa Barbara, CA. The 21-date outing moves from the West Coast to the East, including a two-night stand March 11-12 in Virginia Beach, VA. The North American trek will conclude with a St. Patrick's Day (3/17) performance in New York City.

A dozen U.K. gigs follow the U.S. tour, keeping the band on the road through mid-June.

The Chieftains will celebrate their 50th anniversary with the release of "Voices of Ages," a collaborative effort featuring music by The Decemberists, The Civil Wars, Paolo Nutini, Bon Iver and The Secret Sisters, among others.

"With 50 years of glorious music behind us," Paddy Moloney says, "I can think of nothing more exciting than to spend another 50 years collaborating with the best voices of the future."

Wow! Sure would be great to get to see a concert in that tour. The CD they released for their 40th anniversary was one of the first Irish Music albums I purchased :)