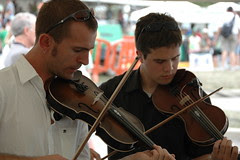 (Photo credit: capn madd matt)Dublin, Ohio – Back in 1988 when Baile Atha Cliath or Dublin as most of us know it was celebrating the millennium of its founding as a Viking settlement on the banks of the Liffey, the newly minted city of Dublin, Ohio had a more modest proposal in mind.

Incorporated just a year earlier as a city on the outskirts of Columbus, the namesake town sought to further connect with the Emerald Isle and establish a music festival that would enhance an already existing Irish dancing feis.

Perhaps portending an ambitious future, the musical guests that first year were the top-shelf traditional music group the Chieftains, who blazed many a trail in Celtic music over the years.

Over the past quarter century the reputation of the Dublin Irish Festival has followed a multifaceted approach to bringing our Celtic heritage to a much wider audience in the Midwest.

Email ThisBlogThis!Share to TwitterShare to FacebookShare to Pinterest
Labels: dublin