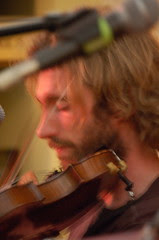 Swerving from infectious slides to slow airs, sean-nós songs to wild, passionate polkas, Begley and Ó Raghallaigh unleash the raw power and beauty of their Kerry music. Don’t miss the opportunity to hear these stellar musicians at close range in October

Formed in 2007, Begley and Ó Raghallaigh have toured Ireland, New Zealand and the USA. Button accordion player Brendan Begley is best known as a member of Boys of the Lough, while fiddler Caoimhín Ó Raghallaigh’s “Kitty Lie Over” CD (with piper Mick O’Brien) topped Earle Hitchner’s 2003 Best Album list. Together, they have a wild, dynamic and fresh sound: according to Earle Hitchner,

“Theirs is some of the most maddeningly nourishing, elevating and mesmerizing Irish traditional music you’ll hear today.” Earle Hitchner. September 26th, 2007, IRISH ECHO

Brendan Begley is bursting with the wild and beautiful music of West Kerry. As a singer he is a gentle giant. On the accordion, he is a force of nature. His is music that could not exist were it not for the mountains, seas and storms of his native Dingle Peninsula. Born into a famous musical family, the youngest of nine children, Brendan soaked up the music and song of West Kerry from an early age. Slides, polkas, songs and slow airs all run through his veins. He has three acclaimed solo albums to his name, as well as numerous recordings with the groups Boys of the Lough and Beginish. He is featured on two albums by the Chieftains (The Long Black Veil and The Bells of Dublin). With the Boys of the Lough, he has toured the Estonia, Finland, Sweden, France and the United States, and has been featured repeatedly on the Garrison Keilor Show.

Born in 1979, Caoimhín grew up listening to old vinyls of The Chieftains, Planxty and The Bothy Band. He started playing fiddle at the age of 10, also learning the uilleann pipes, flute and whistle. He worked at the Irish Traditional Music Archives for a number of years, immersing himself in old recordings of Willie Clancy, Denis Murphy, Paddy Cronin and Seamus Ennis. In 2003 he released Kitty Lie Over with uilleann piper Mick O’Brien to great acclaim. Chosen as #1 Traditional Album of 2003 by Earle Hitchner in the Irish Echo, and described in The Irish Times as “a niftier mood enhancer than any drug therapy” by Siobhán Long of The Irish Times, this has become one of the all-time best-loved traditional music albums. Caoimhín has been the subject of numerous television documentaries, including Faoi Lán Cheoil, where he had the Oscar-winning actor Jeremy Irons as his fiddle student over the space of a year. As well as playing traditional music, Caoimhín writes weird and wonderful new music. His 2007 EP Where the One-Eyed Man is King gained him a whole new audience, leading to him being featured on the cover of the Journal of Music, full page interviews in the Irish Times and the Irish Independent, live broadcasts of concerts on RTE lyric FM’s John Kelly Ensemble and all sorts of other wonderful things. He has recently been commissioned to write music for a major play at the Abbey Theatre in Dublin, and had an entire new solo show commissioned by the Project Arts Centre in Dublin.