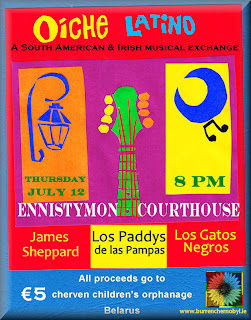 CLARE MUSICIANS LAUNCH A GLOBAL MUSIC EXCHANGE TOUR BETWEEN SOUTH AMERICA AND IRELAND
South American musician returns to his Irish roots to merge Latin America with Ireland
20 June ’12: Clare native musicians, Paddy Mulcahy and Tessa O’Connor are leading a tour of South American and traditional Irish music entitled “Los Paddy de las Pampas” around Ireland this July. The tour will involve playing a number of concerts which will incorporate Irish traditional and Latin American music, with particular focus on Argentina. The aim is to create a global music exchange between Latin America and Ireland.
The idea stemmed for the musicians on their return from playing music in the Irish music community in Buenos Aires, where they met Argentian musician, Tommy Nelson. Tommy’s ancestors come from Ireland, he is an accomplished guitarist and Charango player and is behind the strength of the Irish Traditional music scene in Argentina.
While in South America the “Los Paddy delas Pampas” tour brought them through Argentina, Bolivia and Peru, with it culminating in an appearance for Paddy and Tessa on a Bolivian TV chat show and a concert in the infamous Irish traditional ‘Fahy Club’, in Argentina.

When commenting on the event ethnomusician, Paddy says “the aim is to play a mix of Irish ballads, traditional South American songs, from the globally recognised Cuban classic Guantanamera, to less recognisable songs such as “Todos Juntos” (All Together), and an English Language version of Duerme Negrito (Lay there,Iittle baby) .We really want to share what we discovered in South America – and hope to make the South American songs fun and accessible to an Irish audience while adding something to the existing Irish songs through the alternative rythm and instrumentation.“
This tour will then be extended to a repeat concert in Buenos Aires on St.Patricks day.