Cavan tunes up to reel in the folk - The Irish Times 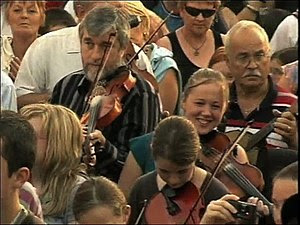 Fleadh (Photo credit: Wikipedia)IF YOU WERE to ask the average person to name the biggest music festival due to take place in Ireland over the next few weeks, odds are they’ll say Electric Picnic, which is expected to attract between 30,000 and 35,000 music fans to Stradbally in Co Laois at the end of the month.

But the average person would be wrong, because this week sees the annual Fleadh Cheoil na hÉireann take over the streets of Cavan town for the third consecutive year, and organisers suggest there will be almost 300,000 visitors to Cavan over the duration of the festival.

The Irish traditional music scene is thriving at the moment, and there is no better evidence than in the huge crowds of musicians and fans from across the country, and the world, who will gather over the next 10 days to learn, compete, dance, drink and above all play lots of tunes and sing lots of songs.

“We’re lucky to have it in the times we live in, and the Fleadh has definitely changed how people perceive what a festival is. There’s no other festival like it,” says the local accordion hero Martin Donohue, who is a central figure in bringing the Fleadh to Cavan and making it such a success. To say Donohue is a larger-than-life character is to somewhat understate his charisma, and his exuberant enthusiasm is reflected in the festival he has put together with a team of volunteers.

Certainly, Cavan has suited the Fleadh and vice versa: the traditional Fleadh Cheoil organised by Comhaltas Ceoltóirí Éireann, full of music, dancing and marching competitions and classes in the Scoil Éigse, has been expanded to include a dizzying array of arts exhibitions, talks, pageants, plays and other events.

“There are so many attendees who come like clockwork, people who have grown up with the Fleadh, who tell me that Cavan has had a dynamo effect on the Fleadh in the past few years,” says Donohue.

“We’re very proud of it, and in particular working closely with the county council has helped us to raise the bar.”

The annual festival of Irish music kicked off last night in the Liberty Insurance Dome with a knowingly titled Concert of No Musical Demarcation, an International Fund for Ireland celebration concert featuring Donohue and Ulster Scots performer Willie Drennan, with the Mullaghboy Accordion Band from the Mullaghboy Orange Lodge playing alongside local musicians. It’s a continuation of a central theme in Cavan’s hosting of the Fleadh: the power of traditional music to cross community boundaries, which last year saw a parade of Lambeg drummers through the town. In the process, it is laying important ground for next year’s Fleadh, which will be hosted in Derry.

The schedule of concerts features an all-star cast of trad music stars, from Sharon Shannon’s performance with a 40-piece orchestra tonight to a Clannad and Altan double-header on Thursday, and Eleanor Shanley and De Danann play on Tuesday. Friday boasts Trad Legends in Concert, featuring Donal Lunny, Paddy Glackin, Liam O’Flynn, Andy Irvine and the legendary Cavan lilter Seamus Fay. And that’s not to mention the 30-odd album launches during the week and the line-up of events on the Gig Rig at the Egg Market.

But to focus on the headline acts is to completely miss what makes the Fleadh so special: it’s just as much about the groups of talented children playing jigs and reels on the side of the street, the rousing sessions crammed into every corner of every pub in town, the instrument makers selling their finely crafted bodhráns and fiddles. It is a very democratic festival, in the purest sense.

“While it’s obviously about the music, the Fleadh here has been innovative and it’s broken some boundaries in that it’s grown to include other cultural and arts events,” says Philip Doherty, a local playwright and founder of the Gonzo Theatre group.

Last year, Doherty staged Fleadh Town, an interweaving series of stories about the 2010 Fleadh that at once contextualised, satirised and mythologised how the event changed the town. Gonzo is staging it again this year, alongside a new work, The Devil’s Céilí.

“The atmosphere of the Fleadh is incredible; loads of people on a lovely buzz,” he says. “It’s got every element of Irishness to it, from your traditional Comhaltas competitions to countercultural fringe events to the best part of our drinking culture. I think an arts festival will grow out of it, definitely. It gave confidence to Cavan people to put on not just a local festival but a national festival.”

Donohue, positive as always, echoes Doherty’s sense of optimism. “Everybody gets involved,” he says. “And it’s true that times are hard, but never have as many community groups been active in the town, and the Fleadh has identified strengths in the community that they didn’t know about [until] three years ago. Cavan has been put on the map through traditional music, song and dance, and how lucky we are.”