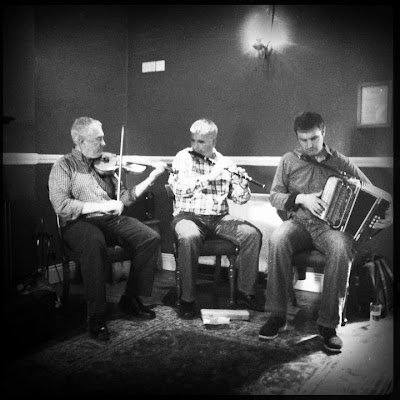 John Wynne is one of the finest flute players of his time. From Roscommon town, John was naturally drawn to playing in the celebrated North Connaught flute style. After initial tuition from Paddy Ryan, John was helped in starting the flute by the great Patsy Hanley. His playing was strongly influenced by players from the region, such as Matt Molloy, Seamus Tansey and Peter Horan.

He has won All-Ireland titles at various grades on flute and whistle. He plays and teaches regularly at workshops and festivals in Ireland and abroad, was a member of the group Providence between 1998 & 2001, and released a solo album, "With Every Breath".

John McEvoy has established himself as an outstanding exponent of the north Connaught style of fiddle playing. Although brought up in Birmingham both his parents came from north Roscommon and hailed from families steeped in traditional music and the GAA. John’s early musical influences included fiddle players such as Kevin and Jack Cullen and Paddy Ryan all of whom hailed from Roscommon. Through his association with Paddy Ryan John had access to recordings of the Sligo fiddle masters and the McDonagh brothers who left a lasting impression on him.

John has toured Europe and North America and has been a guest musician with the band ‘Providence’. He can be heard on a number of albums including his solo release in 1998 with his wife Jacinta, a fine accompanist and concertina player and also on the much acclaimed CD ‘The Kilmore Fancy’ with his sister renowned flute-player Catherine McEvoy.

Paudie O Connor is an accordion player from Sliabh Luachra Kerry. His playing follows in the traditions of Sliabh Luachra with his influences ranging form the bowing of Padraig O Keeffe and Denis Murphy to the to time spent in his youth playing with local box players Johnny O Leary, Jimmy Doyle and John Brosnan. In 2005 he launched a landmark recording of Sliabh Lauchra music entitled Different State which featured in the best of 2005 lists of both The Irish Times and The Irish Echo. Paudie’s music also featured on the album The County Bounds, a 1999 Ossian records production featuring a compilation of music from the Cork Kerry Border including contributions from Johnny O Leary, Jackie Daly and Peadar O Riada.