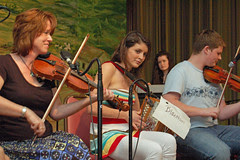 (Photo credit: Irish Philadelphia Photo Essays)ONCE again Camross Comhaltas had great success in a wide range of competitions at the Leinster Fleadh Cheoil which was recently held in Enniscorthy.

In the button accordion age group 15 to 18 Joseph Keane received 1st place and was presented with the Ena Doocey Trophy. Cliona Dowling McDonald who was u12 got first place in English singing and was presented with the Maurice McAuley Cup. She also came second in the flute competiton. Ciara Mackessy who won first place in the tin whistle competition also got 2nd on the concertina and tin whistle slow airs u12. Aaron Mackessy in the 12 to 15 category also won 1st place both on Banjo and Mandolin. Isobel Donnery got second place in u12 bodhran Conal Nevin came second in u12 drums.

Maeve Scott won first place in the u12 tin whistle slow airs as well as winning first palce in the u12 trio with her sister Ellen and brother David. Martin Delaney came in second place in the o18 men’s English singing. The set dancing ladies in u12 and the 12 to 15 age group, St Fergal’s dancers came in 2nd place. In the set dancing mixed u12 St Fergal’s came in first place and were presented with the Donnacha O Muineachain Cup, St Aidan’s secured 2nd place.